A brief history of cocktail bitters and the medicinal plants that make them. First printed in the book Kew’s Teas, Tonics and Tipples. 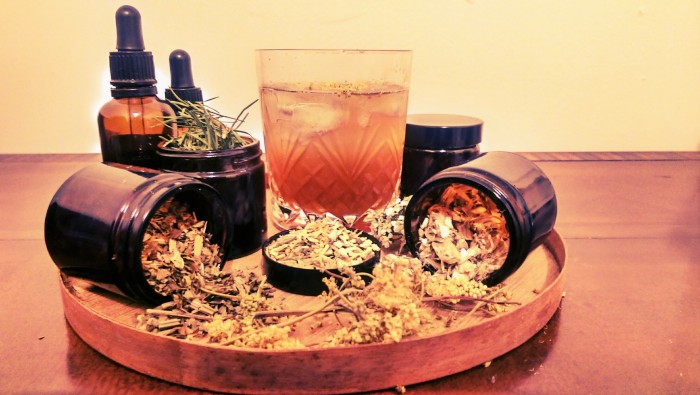 According to its most basic definition, a cocktail is simply a mix of two or more drinks, one of which contains alcohol. This simple premise proves to be an endless source of intoxicating concoctions – blending spirits, liqeurs, cordials and juices made from a whole array of herbs, spices and fruits. In search of the best way to get their customers deliciously drunk, mixologists are returning to the classics for inspiration, spurring the recent renaissance in the cocktail, as old favourites take on new twists. Looking beyond the simple and the sweet for the complex and unusual has led to the rediscovery of the importance of cocktail bitters – plant extracts that add an extra depth of flavour and balance sweetness.

Bitter is often described as the ‘forgotten flavour’, as though it is fundamental to the range of human taste it is often avoided – but it appears to be having a comeback, as bitters make a welcome return to cocktail menus. These plant extracts were fundamental to the original cocktail as shown in the first written definition that appeared in an American weekly in 1808:

“Cock-tail is a stimulating liquor, composed of spirits of any kind, sugar, water, and bitters”

This is why the basic blend of whisky, sugar and bitters gets called an ‘old fashioned’ – but the history of bitters goes back further.

The medicinal roots of bitters

Bitters began life as medicinal preparations made from many different plants, that became the classic cure-all tonics and were widely available in pharmacies in the 18th and 19th centuries. At some point they began to be mixed with spirits and drunk for pleasure, probably beginning as a way to dilute the strong flavour of the medicine and developing into an excuse for getting drunk. This is thought to be the origin of the classic British cocktail; soldiers stationed in India had to drink regular doses of cinchona bark to protect against malaria and to mask its unpleasant flavour they mixed it with gin and lemon, thus creating the gin and tonic.

Unearthing the roots of bitter tonics throws up many such stories, revealing a fascinating history of the medicinal use of plants. By returning to herbal medicine and discovering the traditional uses of local plants we can find clues as to where to look for new flavouring ideas and gain an understanding of the elements that make up bitters.

Herbal medicines are often unpleasantly bitter because they are concentrated extracts of parts of plants we would not normally eat in large amounts. However, this bitterness also serves a therapeutic function that has been recognised for thousands of years.

Bitter taste receptors on the tongue send signals to the digestive tract that cause the release of a range of digestive juices and increase the movement of the gut wall. The complexities of this mechanism are still being untangled, but basically a dose of bitters acts as a wake-up call and kicks the whole digestive system into gear.

As a result, bitter leaves, barks and roots are employed in many different herbal traditions to treat digestive complaints ranging from infections to poor appetite and general indigestion.  Wormwood (Artemisia absinthum) gets its name from its ability to kill intestinal parasites and its medicinal use led to the development of vermouth (the German name for the plant is vermut) and the notorious spirit absinthe.

From medicine to drink

The effect of bitter taste on the appetite is the origin of the aperitivo hour in Italy, when drinks such as campari, aperol, and vermouth are drunk before a meal. This idea of an aperitivo has even been traced back to Greece in 400 A.D. Many traditional medicinal bitter preparations survive as aromatised spirits on continental Europe drunk on their own, with a great range of different variations on the theme available in different localities.

In Germany they are known as Kräuterlikör – ‘herb liqour’, in Switzerland they have Alpenbitter as many of the plants are gathered from the mountains, and in Italy they are known simply as amari – ‘bitters’. The British seem to be content with their gin and tonic, or perhaps it is because they prefer to take their bitters in the form of beer.

The version of bitters most associated  with cocktails are closely linked to the Americas, where in the hands of enterprising advertisers ‘bitters’ became the name for a whole range of health boosting tonics. The most commonly known cocktail bitter is Angostura bitters, developed by a German doctor in Venezuala in 1824 to help the soldiers of Simón Bolívar’s army deal with stomach ache. The interesting flavours of this medicine became recognised and was added to cocktails. Bitters then began to be developed specifically for use in cocktails, designed to only be given out in drops, and recent years have seen a proliferation of bitters producers.

All these bitter preparations have their historical roots in local monasteries, then pharmacies, that would take use a variety of local herbs to make their medicines. These plants would be dried and steeped in alcohol to extract and preserve their medicinal properties.

One of the many cinchona species that were used as an anti-malarial. plantillustrations.org

Some of the many amari available. CC wikipedia. 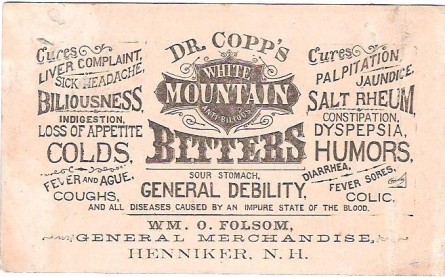 Advertisement for bitters. Library of congress.

Gentian root was one of themost popular bittering agents. plantillustrations.org

The plants that make the bitters

The bitterness can be derived from many different roots, leaves and barks. One of the most commonly used bittering agents is the root of yellow gentian (Gentiana lutea) that grows in the mountains of central and southern Europe. Although it contains one of the bitterest compounds known, amarogentin, the flavour of the root extract is more complex, with layers of different bitters, a sweetness and even a slight floral note. Many bitter roots also have sweet elements as roots are where a plant stores sugars. Other plants with subterranean parts that lend themselves to bitters include chicory, often used as a coffee substitute, dandelion and burdock, originally taken together as a spring tonic, and angelica, an important component of gin and other spirits.

Barks are often bitter, but also contain chemicals called tannins that give astringency, the effect of tightening tissues that in small amounts adds an interesting sensation to a blend – this is why wine is aged in oak barrels. All the barks that have been used in bitters have a history of medicinal use, such cinchona bark for treating malaria, willow bark for treating arthritis, and oak bark for treating sore throat.

Added to the fundamental bitter elements were a wide range of medicinal plants. These were often aromatic spices, such as fennel, cinnamon, aniseed, angelica and cardamom.

These spices have a high essential oil content that gives them their strong flavour and explains their use in herbal medicine as carminatives that settle the digestive tract by reducing the build-up of wind, and often have an antimicrobial action. This is why they are the more dominant component in the mix of digestifs – liquors drank after a meal to settle the stomach. They were likely added to the blends of bitters because of their digestive use and to make the medicine more palatable. Although not as widely used medicinally the rind of citrus fruits, particularly orange and grapefruit, have become popular in cocktail bitters as they combine both the bitter and aromatic elements in one.

These are just some of the plants that can be used to make bitters – there are many more out there, each with an interesting tale to tell and a robust, intense flavour to add depth to many a cocktail.

This is a version of an essay that first appeared in the book Kew’s Teas, Tonics and Tipples, which includes over 80 recipes for botanically inspired drinks as well as essays on the history of plants and drinks. It is beautifully illustrated throughout with prints from Kew’s archive.

You can buy a copy from the Kew Gardens online shop.

If you would like to find out more about the use of wild plants in cocktails then come along to one of my London foraging courses on wild spirits – an introduction to foraged flavours for cocktails or contact me to discuss organising a walk in your area.

3 thoughts on “The Medicinal Roots of Cocktail Bitters”

Sign up to our newsletter
to receive monthly updates on what plants are in season, wild food recipes and details of our foraging courses.